ABOUT US
|
The context of KGHM operations
Geological, mining and metallurgical operations in Canada, the USA, and Chile The silver market in 2014

Copper prices during the year

The year 2014, in line with market expectations, saw further declines in the price of copper on world stock exchanges. The annual average price of the red metal amounted to 6 862 USD/t and thus was lower by more than 6 per cent, compared to 2013.

The beginning of the year, despite the relatively positive macroeconomic data and declining of metal exchange inventories, was marked by a slow decline in copper prices. Negative information coming from China in the following months, however, contributed to a sharp increase in sales of the metal, in March. The PMI index for Chinese industry significantly decreased, crossing the psychological barrier of 50 points, and amounted to 48.5 points. The key factor, however, turned out to be the insolvency of Shanghai Chaori Solar - the first company in the Middle Kingdom which was unable to pay off its bondholders.

The following months of the first half of the year brought an increase in copper prices due among others to the lower availability of scrap, as well as due to purchases of the metal by the Chinese State Reserve Bureau (SRB). This good run was stopped, however, by further bad news from the Middle Kingdom. In May - for the first time in two years - falling prices were recorded on the Chinese real estate market. This raised considerable concerns about demand for base metals. Meanwhile, in June, a wave of panic triggered an investigation into the illegal use of copper and other metals, accumulated in port warehouses, in financial transactions. The case concerned the port of Qingdao, the seventh largest port in the world. The scandal has not only rocked the faith of investors, but also resulted in the banning of some of these types of financial transactions and the limited availability of credit to Chinese companies.

The second half of the year marked a drop in the prices of most raw materials, including copper. Despite the systematic deterioration in market moods and declining stock market inventories, macroeconomic factors prevailed. The increasingly evident slowdown in China, the recession in Japan, and stagnation in the euro area, awakened concerns about demand for base metals in the future. In addition, a huge discount on crude oil has been read as a sign of weakening global economic activity. 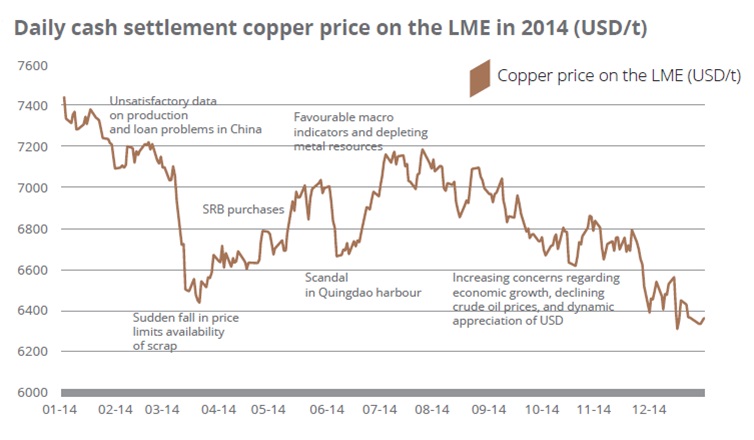 One of the key factors for commodity prices in the second half of 2014, was the increase in the value of the US dollar. Completion of the asset purchase program (QE) by the FED, and the faith of investors in the accelerating US economy meant that the USD rate against the major trading partners of the United States increased in six months by more than 11 percent. This of course meant, that most of the major currencies weakened against the dollar, while the change in metal prices denominated in these currencies was not as significant as in the case of the price in USD. The price of copper at year-end amounted to 6 359 USD/t, while in PLN it was 22 302 PLN/t. The average price of the red metal in the Polish zloty in 2014 amounted to 21 629 PLN/tonne. 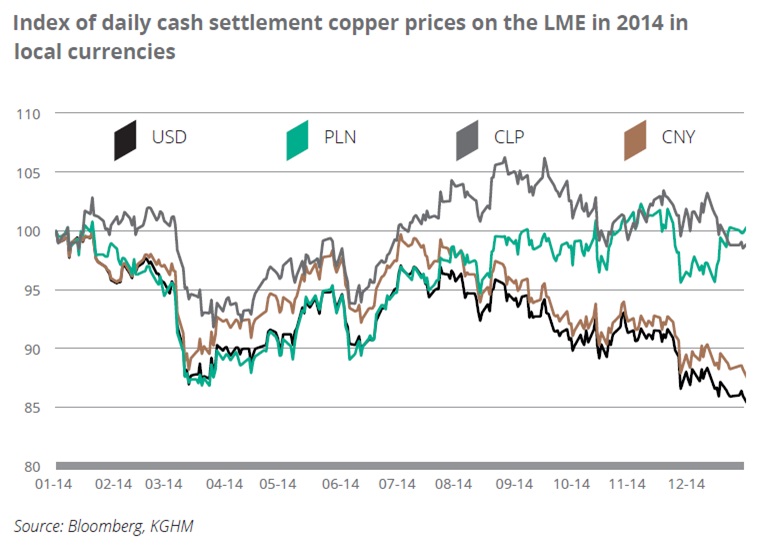 The year 2014 proved to be a difficult period for copper producers, not only because of the falling prices of raw materials. According to CRU estimates, the amount of mined copper in the world increased by only 1.7 per cent, which was due to production stoppages, poorer quality ore

, and delays in launching new projects. 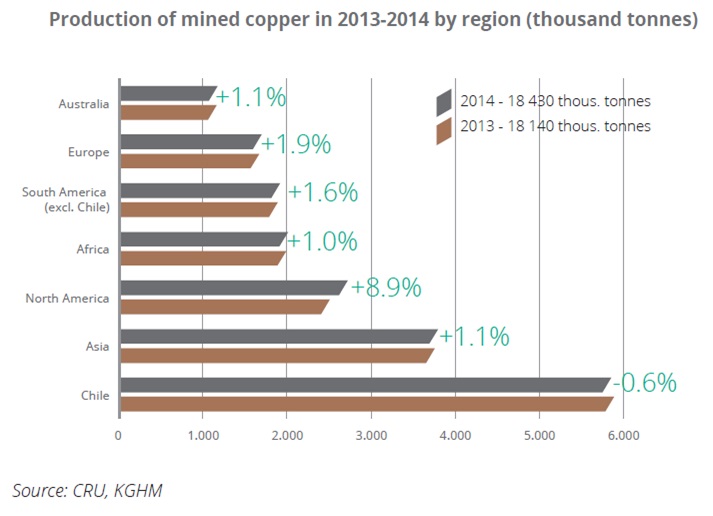 , responsible for almost 1/3 of world production of the metal, but the amount of raw material mined in 2014 in the country decreased in comparison with the previous period. This outcome was strongly affected by numerous strikes, both in the mines as well as in the commercial ports that support exporters. In September, a protest was announced in the largest openpit copper mine in the world - Escondida, owned by the BHP Billiton Group. Three months later, another strike was announced by highly qualified employees of Los Bronces, which belongs to the Anglo American Group. Throughout the year, protests spread to 14 Chilean ports, which led to paralysis in not only copper exports, but also exports of agricultural raw materials and other goods.

Another negative factor last year was the growing opposition of environmental organizations to the expansion plans of the copper industry in the country. Due to the lower quality of the extracted ore, local companies were forced to intensify their search for new deposits, which raised societal concerns about the degeneration of the natural environment. Tax reform announced by the newly elected President Michelle Bachelet, which aims to reduce social inequalities in the country, also raised concerns. These changes may partly hit local mining companies, among others.

International copper producers were also affected by the new regulations concerning the raw materials trade in Indonesia. Early last year, the local government introduced a ban on exports of metal ores, which caused a drastic decrease in the extraction of raw materials, including copper, and universal opposition from the mining industry. The condition for the resumption of metal export outside Indonesia is a commitment by the manufacturer to build a smelting plant in the country.

Despite deterioration in market sentiment, refined copper production in 2014 rose by 4.5 per cent, to 21 689 thousand tonnes. The leaders among manufacturers are Chinese producers, who last year managed to increase the amount of copper cathodes

produced by a further 0.5 million tonnes, which reflected earlier high investments in metallurgical capacity expansion. Other regions of the world also significantly improved productivity, with the exception of South America, where the production of the red metal remained essentially unchanged. 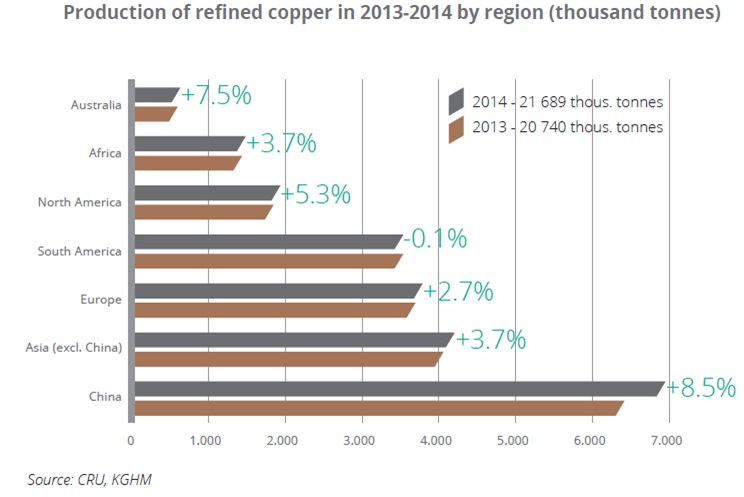 Codelco still remains at the top of the group of the world’s largest copper producers. In 2014, the Chilean giant produced 1 867 thousand tonnes of mined copper and 1 432 thousand tonnes of refined copper, which accounted for 10 per cent and 6.5 per cent of global copper production, respectively. KGHM came in eighth place in terms of mining production, with a score of 526 thousand tonnes, and in tenth position in terms of refined copper: 607 thousand tonnes, which accounts for almost 3 per cent of market share. Although most of the leading manufacturers recorded production growth in 2014, many of them have met with difficulties and delays, especially in the area of extraction. One of the most famous cases last year was a conflict between Rio Tinto and the Government of Mongolia, which resulted in suspension of expansion of one of the world’s largest copper and silver mines located in the country - Oyu Tolgoi. The Freeport McMoRan Corporation also had a dispute with the local authorities, and in order to be able to export copper from the world’s third largest mine, Grasberg, the corporation agreed, in the end, to a higher tax rate on minerals, a higher export tax, and promised to build a smelting plant in Indonesia.

In Chile, the production delays affected, among others, the Ministro Hales mine, which is a key element of the 5-year Codelco strategy aimed at overcoming declining production rates. The reason for the stoppages was technical difficulties in processing ores with a high arsenic content. BHP Billiton also reduced its investment plans. The Australian giant suspended Olympic Dam expansion plans, once a priority project, because of falling metal prices.

At the end of the year information appeared about the potential takeover of Rio Tinto by the company Glencore.  Following the earlier merger with Xstrata and after such a large takeover, the Swiss giant would become the largest mining company in the world. 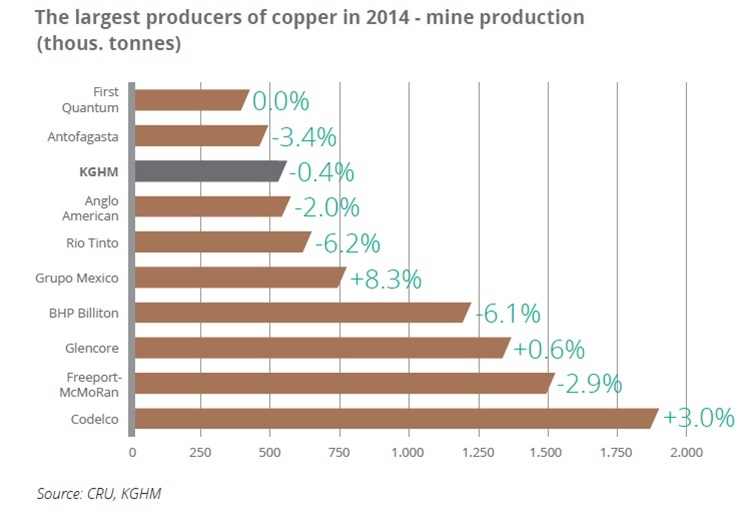 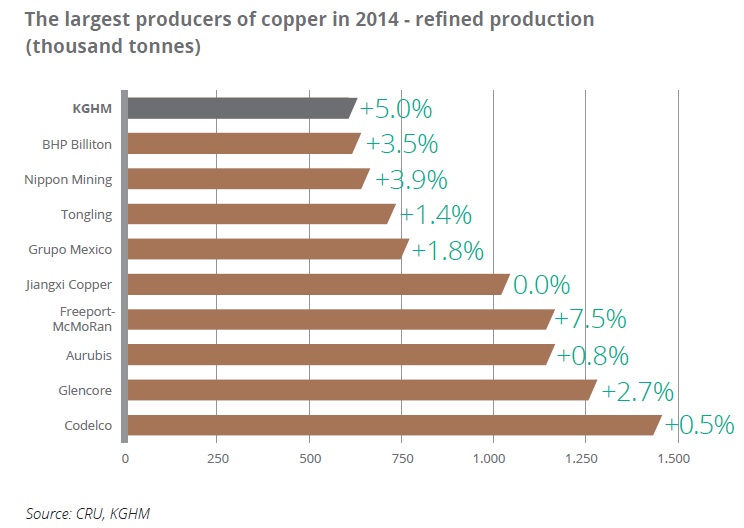 World copper consumption in 2014, according to CRU estimates, increased by 3.5 per cent and amounted to 21 525 thousand tonnes. Undoubtedly, China remains the biggest consumer of copper, which accounts for almost half of the world’s consumption of raw materials. The demand for the red metal in the Middle Kingdom amounted to 9 591 thousand tonnes and was higher than the previous year by more than 0.5 million tonnes – which is roughly equal to the increase in refined production

in the country. Despite significantly lower economic growth in China in percentage terms, the size of the economy in nominal terms still generates huge demand for raw materials, including copper.

World consumption, excluding China, remained at a relatively stable level in 2014. A slightly better economic situation in the euro zone allowed for solid growth, driven among others by growing car sales. The still-growing economies of Asia also increased purchases of the red metal last year.

Thanks to the decline in copper prices, the previously-observed strong trend of red metal substitution by aluminium slowed. Studies by a copper producers association have shown that it is the difference in price between the two raw materials that is the main motivation for consumers to seek alternatives to copper. 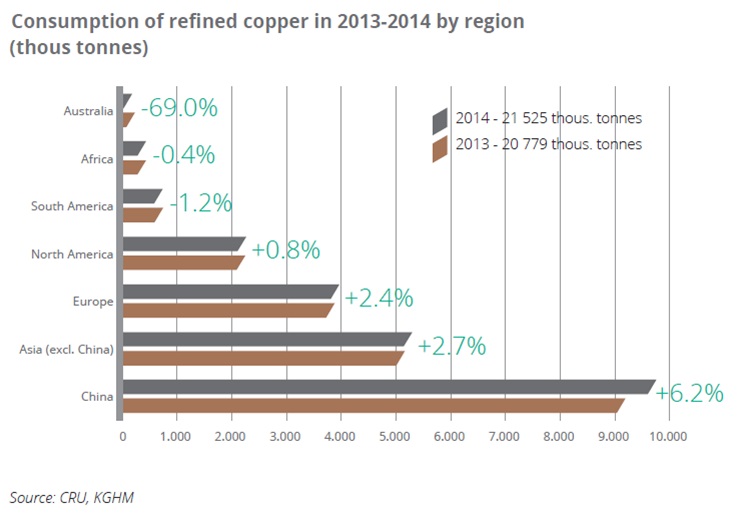 Official inventories on the LME, COMEX and SHFE stock exchanges fell steadily in the first half of the year, continuing the strong trend from the second part of 2013, followed by a relative stabilisation.

According to CRU estimates, inventory levels of metal in the world, in relation to demand, did not differ significantly last year from the level recorded in the previous few years. 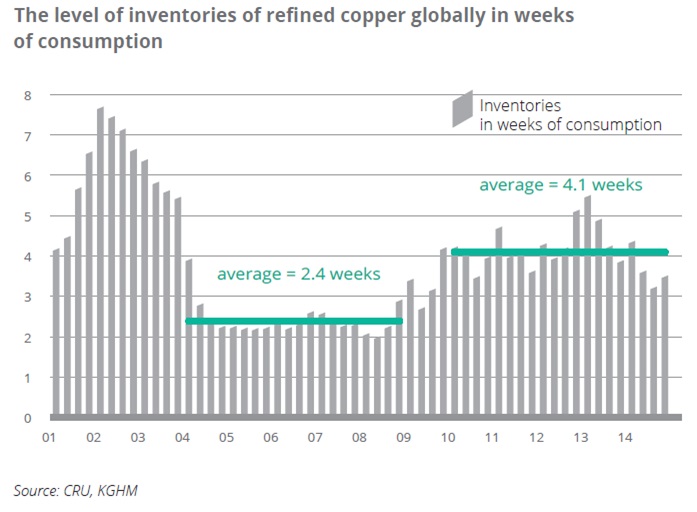 According to CRU estimates, world consumption of the red metal will increase by an average of about 3 per cent each year, until the end of the decade. Europe emerging from the economic crisis, Asian and South and Central American countries focused on infrastructure investments, as well as the emphasis on sustainable management – all should contribute significantly to the fulfilment of this forecast.

The most important factor for the copper market will therefore be the supply side. 2014 uncovered a number of factors that may adversely affect the performance of manufacturers. One of the factors most difficult to predict, and having the most serious effects, are changes in legal regulations and community pressures, particularly in developing countries. Other important factors influencing lower production are problems with infrastructure – the insufficient production of electricity in Africa, water shortages in Chile – and an even lower metal content in mined ore.

The past year has also highlighted the sensitivity of investments of mining companies to the price of copper. In response to the falling prices of the red metal, numerous mining projects are being reexamined, which results in delays. This, in turn, means that the originally planned production will not increase the availability of the material, which should affect the price. Rising production disruptions as well as revisions of plans to increase production by leading companies are reflected in the estimates of industry analysts. Market balance expectations in 2015 have been systematically revised downwards, and some institutions, which expected an oversupply of the metal, are currently inclined towards the thesis of a raw material shortage. 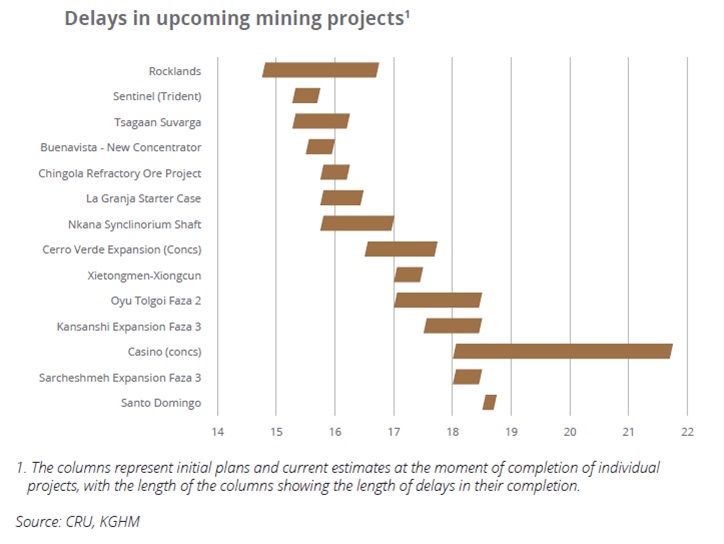