Silver price during the year

In 2014, silver prices followed those of gold, but the drop in the value of silver was greater, as reflected by the gold/ silver index, whose average value for 2014 rose to 60.16. The largest price changes took place in the second half of the year. At the beginning of the year ore

prices correlated mainly with the decisions of the Federal Reserve on phasing out quantitative easing operations and with incoming information about the condition of the US economy. As a result of weak macroeconomic data from the US and a slowdown in emerging economies, precious metals prices rose. They became less expensive, however, in response to the improving economic situation, which made the end of the dollar-weakening monetary policy increasingly justified.

The end of February and beginning of March were marked by the conflict in Ukraine and disturbing information from China. The situation affected growth on the precious metals markets. Taking into account the conflict in Eastern Europe, investors increased the share of ores in their portfolios. At mid-year, a key event for the silver market was the announcement of the London Silver Market Fixing Limited on the termination of the existing mechanism for determining the price fix. The old method was replaced by a new solution based on an anonymous auction system. 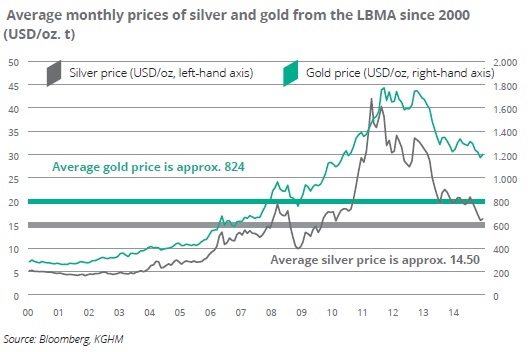 At the end of June and beginning of July, the price of gold and silver increased again, mainly due to geopolitical events: further escalation of the conflict in Ukraine and planned military operations in the Middle East. From mid-July, the price of silver returned to a declining path, broken by emerging reports on the Fed’s planned activities. Final completion of the program of quantitative easing by the FED at the end of the year contributed to the appreciation of the USD and further depreciation of raw materials. In turn, the ECB gave details of a plan to implement its own program of QE in the future. At the end of the year, very positive macro data from the US poured in, and depreciating oil and low inflation also meant that investors were more interested in equities than commodity markets.

Silver closed 2014 at 15.97 USD/oz. t. Compared to the end of 2013, this was approximately a 19 per cent decrease. It is worth noting that, as in the case of copper, the dollar price drop was largely offset by the weakening of most other currencies against the euro. The silver price in PLN at year’s end was 56 PLN/oz, or 4.5 percent less than in the final days of 2013.

Last year, KGHM produced 1 259 tonnes of silver and returned to the rank of industry leader. In the coming years, forecasts project a decline in production of silver and a reduction of surplus raw materials until 2016, inclusive. 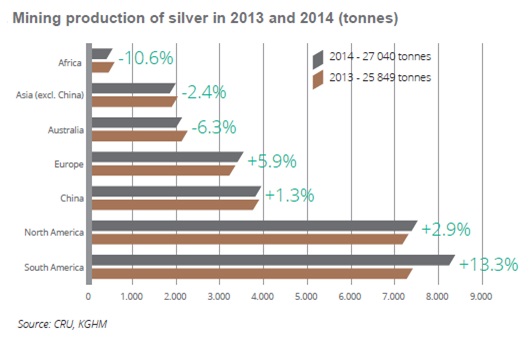 Industrial demand for silver increased by 2.2 per cent, compared to 2013, and amounted to 27 750 tonnes. The biggest growth in demand for raw materials was recorded in the electronics sector. Demand from the photography industry and producers of coins and metals decreased. In July, the US Mint provided information about the decline in sales of coins by 33 per cent month-to-month and 18 per cent year-to-year. Next year, the global demand for silver is projected to increase by about 175 tonnes. It is worth noting that the growing interest in gold and silver is due to China and India, which are the world’s biggest buyers of these metals. In the case of gold, demand from these countries currently represents around 60 per cent.

Given the dynamic growth in both economies and the growing wealth of their citizens, this will be an important factor in the development of the metals markets. 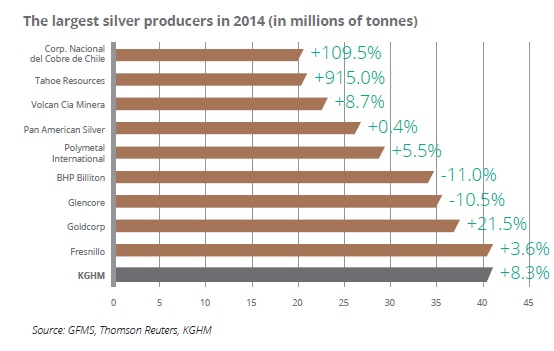 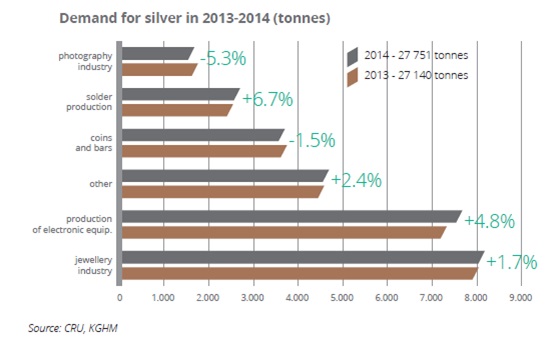 Holders of ETFs and investment banks lost most on the declines in the price of gold and silver. ETFs had been reducing their inventories for the better part of the year. At the end of the year, due to the losses incurred, investors closed a significant part of their positions and contributed to the reduction in the size of the funds. 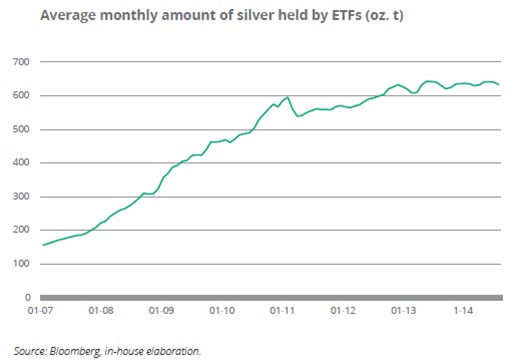