ABOUT US
|
Description of KGHM Polska Miedź S.A. activities
KGHM today and tomorrow Structure of the Group

Home / ABOUT US / Description of KGHM Polska MiedÅº S.A. activities

KGHM runs a high-tech geological, mining and metallurgy business. KGHM’s assets are located on three continents. The Company focuses on copper mining and copper production as well as the production of precious metals and other non-ferrous metals.

KGHM is the largest silver producer and eighth largest copper producer in the world. In addition to these two main raw materials, it also produces gold, molybdenum, nickel, rhenium, lead, and platinum. KGHM also mines rock salt, which is extracted from the level above the Polish copper and silver ore

The shares of KGHM Polska Miedź have been listed on the Warsaw Stock Exchange (GPW) since July 1997. Since November 2009 the Company has been a part of the RESPECT index of socially responsible companies on the WSE.

KGHM POLSKA MIEDŹ S.A. has a diversified portfolio of geological and mining projects in various stages of development. 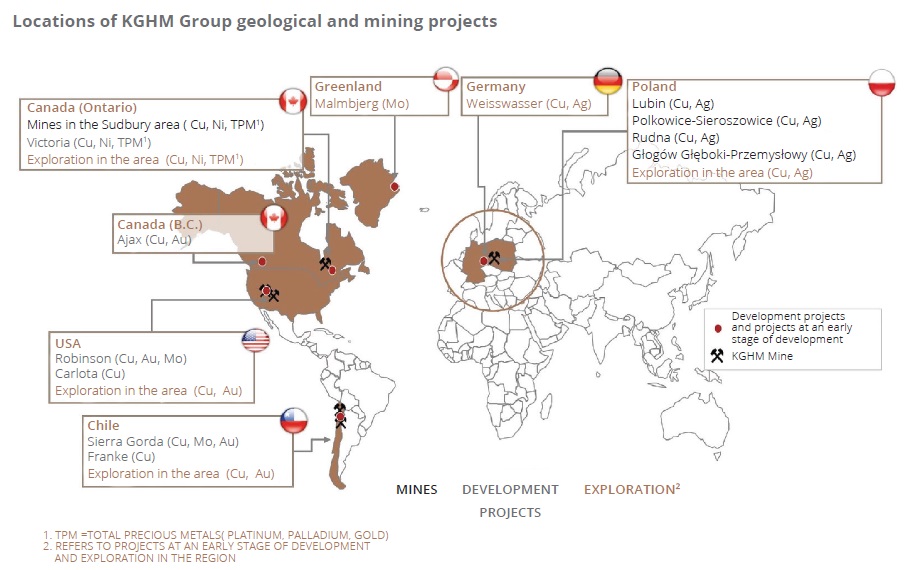 KGHM’s resources are currently estimated of 44.4 million tonnes of copper in situ, with proven and probable reserves of 22.7 million tonnes. Documented global mineral reserves amount to 700 million tonnes. All around the globe there are more than 1 000 known copper ore deposits, of which approximately 400 are being mined. Copper accounts for 16 per cent of the total value of all metals mined from all world deposits. The good prospects of the copper market today are determined by high demand in China and other Asian countries.

The company is licenced for the mining of Polish deposits, estimated at around 26 million tonnes of copper. They will allow ore extraction in Poland to be maintained at current levels for the next 30-40 years. KGHM strengthened its international position through foreign investments made in 2012.

The company also operates copper mines in North and South America. These include: