Home / CORPORATE GOVERNANCE / Management Board / Letter from the CEO

Letter from the CEO 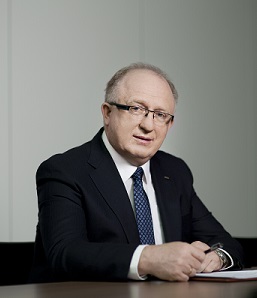 It is with great joy and pride that I present to you the Integrated Report of KGHM Polska Miedź S.A. for 2014. For KGHM, 2014 was a year of great challenges, but also historical achievements. They relate primarily to our core business.

A stable level of mining production, growth in metallurgical production, and maintaining cost discipline are the main achievements of the KGHM Group in 2014. 2014 was another year of progress in production areas and development of the resource base, as well as financial security. The established targets were achieved.

In 2014, the production of payable copper

was close to that of 2013 and amounted to 663 thousand tonnes. The production of metallic silver increased by 8 percent and reached 1 256 tonnes. This result enabled KGHM to once again become the leader amongst the world’s silver manufacturers. On the other hand, the production of other precious metals such as gold, palladium, and platinum was 152.9 troy ounces, which indicates growth by 15 percent. The KGHM Group closed 2014 with a net result of PLN 2.45 billion.

The difference in the result as compared to 2013 was caused mainly by low commodity prices, primarily copper and silver. The price of silver declined by nearly 20 percent, and copper by over 6 percent, relative to 2013. The minerals extraction tax had a substantial impact on KGHM’s results; it amounted to PLN 1.5 billion and accounted for 30 percent of the unit concentrate production cost. The net profit achieved in these conditions is a consequence of stable production and financial discipline.

The most important event for the KGHM Group was the commissioning of the open pit mine Sierra Gorda in Chile, in 2014. This project confirmed KGHM’s high expertise and enabled it to become one of the largest copper producers in the world. Commissioning of the Sierra Gorda mine marks a growth in copper production by KGHM, as well as increased financial effectiveness and an improved product portfolio.

In the second half of 2015, the Sierra Gorda mine should achieve its designed production capacity of at least 110 thousand tonnes of ore

Directional decisions will be made this year concerning the second phase of the project. Upon its completion, the production of copper will have doubled and will reach at least 190 thousand tonnes of ore per day. The areas adjacent to the pit currently under operation, to which KGHM owns the rights, have a promising exploration potential. Initial estimates show the possibility of a substantial extension of the mine’s operational life.

The Victoria project – comprising the construction of a polymetallic underground mine in Canada – was continued as planned. Advanced project work was continued as well as preparatory work for the sinking of the shaft. Engineering work continued on the Ajax project which take into account the results of analysis conducted to date on technological improvements of the project, which are necessary for the completion of the Basic Engineering Report in 2015.

A stable level of production in Poland is ensured by mining in the area of Deep Głogów which was launched in 2014 at a level below 1 200 meters, as well as other intensive mining work.

We have obtained the rights to new concessions in areas adjacent to our current operating sites in Poland. We have documented resources of 4.1 million tonnes of copper ore and about 7.5 thousand tonnes of silver in the region of GaworzyceRadwanice. The life of our deposits in Poland is currently estimated at 30-40 years.

We want to replace every tonne of extracted copper with three tonnes of the metal in our newly-documented resources.

Work on the Pyrometallurgy Modernisation Program at the Głogów smelter/refinery is proceeding according to plan. The goal of the project is to open a second flash furnace installation. KGHM accomplished the main goals of the strategy for 2009-2018, expanding the resource base and attaining copper production close to 700 thousand tonnes. The main objective of the new Strategy for 2015-2020 with an outlook to 2040 is to achieve annual production capacity of over 1 million tonnes of copper equivalent

and to continue work aimed at improving mine operating efficiency. standards. We remain a reliable producer, a trustworthy business partner, and a corporation committed to pursuing a policy of sustainable development. We continue to unify and build the strong image of KGHM to promote widespread awareness of the values we follow and standards under.

According to the Strategy, over the next six years we intend to carry out an investment program worth PLN 27 billion. Of these funds, 65 percent will be allocated to development investments, with the rest to be spent on maintenance and replacement projects. Achievement of our strategic goals will be based on efficiency and innovation, which already distinguish KGHM, and will ensure our competitive advantage in the future.

The development of new projects aimed at expansion of the Group will be possible through the financing secured in 2014 for the Group’s investment program. KGHM arranged a syndicated loan of USD 2.5 billion and an investment loan with the European Investment Bank of PLN 2 billion. At the same time we plan to continue a policy of sustainable financing, which provides for the use of internal sources supplemented with debt to the extent where the net debt

ratio remains at a safe level. Wherever we operate, we always do so based on the same, highest which we operate. The common values of all KGHM Group employees are zero harm, teamwork, results orientation, accountability, and courage. These values are the foundation of all activities of KGHM on global markets, and they help consolidate international teams between companies, divisions, and continents.

The KGHM brand has also gained an additional graphic design element. This element is the KGHM mineral, whose three-part design symbolises the pillars on which the brand rests - knowledge, cooperation, and the company’s role in the world. With the knowledge and experience of its employees, KGHM mines and processes precious resources, enabling the development of the modern world. Knowledge is KGHM’s most valuable resource, while the long-term and stable development of the company is largely the result of teamwork. At the same time, copper - one of the most amazing metals on earth, which has for thousands of years played a key role in the development of mankind - remains the source of the company’s continued existence, development, and success. By discovering new possibilities, KGHM provides the world with further valuable metals and improves upon efficient and environmentally friendly methods of extraction and processing.

In 2014, KGHM strengthened its position as a socially responsible business. Once again it confirmed that it meets the high requirements for companies included in the RESPECT index of the Warsaw Stock Exchange. We are proud to have been a continuous part of the index since its first edition.

We continued activity in the Responsible Business Forum, and we also joined the UN Global Compact, which is the world’s largest UN initiative for corporate social responsibility and the promotion of sustainable development.

We continue to expand the formula and scope of activities of the KGHM Polish Copper Foundation, which in 2014 allocated PLN 16 million to support individuals, institutions, and organizations. As at this year, the Foundation has a new, project-based dimension to its activities.

We are one of the most desirable employers for students and university graduates, ensuring stability of employment and remuneration, as well as providing opportunities for improvement and development of their professional careers.

Can we accomplish this ambitious vision? I am convinced it is possible, because KGHM is a company created by people with passion and competence. On behalf of the Management Board of KGHM Polska Miedź S.A. I would like to thank everyone who in the past year supported KGHM in achieving its desired objectives. I am convinced that in 2015, just like in previous years, the actions of the Supervisory Board, Management, and Staff will translate into the joint success of KGHM and all of its stakeholders.

Herbert Wirth
President of the Management Board