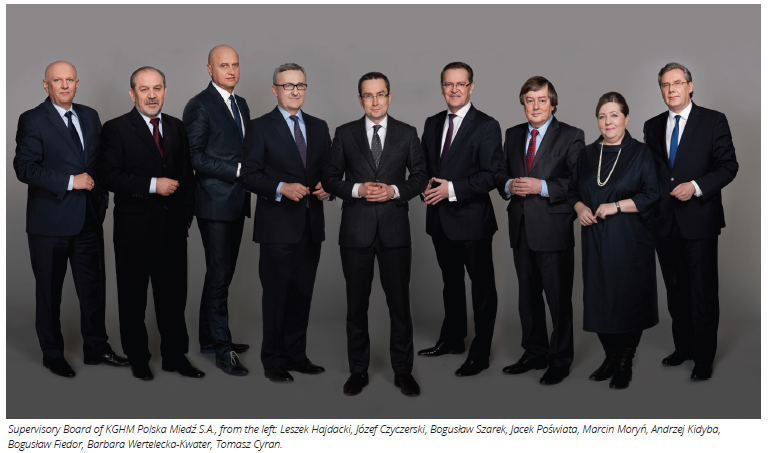 As well as the following persons elected by the employees of the Company:z wyboru pracowników Spółki:

The major duties of individual Supervisory Board committees are as follows:

*„Earnings from other contracts” includes remuneration due to labour contracts in the Divisions of KGHM Polska Miedź S.A. and due to serving on the supervisory bodies of Group subsidiaries.
** “Other benefits” include commuting costs and partial financing of non-cash benefits

Shares of KGHM Polska MiedÅº S.A. held by the Members of the Companyâ€™s Supervisory Board as at 31 December 2014 and at the date of signing of this report

Supervisory Board members, by gender in recent years

Twice a year Supervisory Board members, in compliance with International Financial Reporting Standards (IFRS), issue statements on transactions carried out with related entities.

In 2014 and at the date of this Report the Company was not in the possession of any information about the occurrence of any potential conflict of interests.

The Supervisory Board also reviewed on a cyclical basis Management Board reports on:

The Supervisory Board also reviewed the performance of investment projects approved in the budget.