KGHM IN 2014
|
Our results: Development of organizational abilities and skills
Benefits for employees Indicators

Home / KGHM IN 2014 / Our results: Development of organizational abilities and skills / Safety

Safety is the foundation for all of KGHM’s activities. In 2014, a uniform health and workplace safety policy was implemented called „Program to improve workplace safety in KGHM Polska Miedź S.A. to the year 2020”.

It optimizes the already implemented H&S practices in KGHM and augments the undertaking with locally designed good practices, as well as parameterizes actions at the level of individual initiatives. The document was adopted by the KGHM Polska Miedź S.A. Safety at Work Council, which consists of representatives of the Employers’ Union - the signatories of the collective bargaining agreement - as well as social inspectors from individual divisions.

General aims of the program:

, in particular, the dangers associated with the occurrence of seismic events and their potential effects, in the form of rockbursts and cave-ins. As a result, accidents may happen, with serious or fatal consequences, and damage to underground machinery and equipment / infrastructure, which leads to operational downtimes.

For several years, funds used to protect health and safety in KGHM have been at a constant, high level - to ensure the full financing of specific needs and to meet the highest safety standards existing in the mining industry. 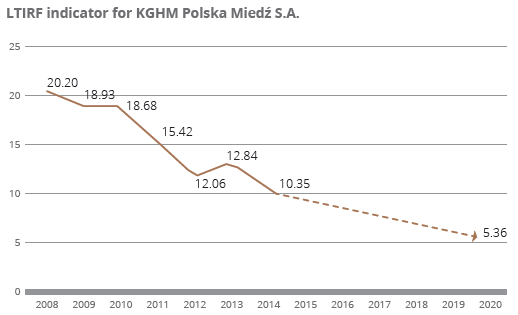 Amount of injuries, professional diseases, lost days, and absences at work; and number of fatal accidents connected with work, by region and gender

KGHM conducts systematic seismological observations, using an extensive network of surface and underground seismic stations, spanning all mining regions and fields. Steps are also taken to limit the risk of rock bursts and roof collapses. An example of this are the operating plans, which define the size and shape of the chambers as well as interchamber pillars, the most favourable direction of mine advance, and the optimal order of deposit

Each accident in KGHM-owned plants is carefully investigated and analysed by specialists. In post- accident protocols the reason for the accident is indicated, as well as the responsible persons (if applicable) and – just as importantly – recommendations aimed at minimizing the risk of repetition of the accident. The circumstances of the events are presented and discussed with the employees of the Company. An example of this are the actions taken after the fatal accident which took place in September, in the Rudna mine. Analysis of the situation showed that one of the miners - despite the provided training and repeated warnings - was under an unprotected excavation ceiling, where entry is strictly forbidden. His death was caused by a patch of rock that broke off from the roof. The sole reason for the accident was the violation of the safety regulations by the fatally injured worker.

After the incident, all underground workers were acquainted with the circumstances of the accident. Special attention was paid to the specifics of work and movement underground. Additional training sessions were scheduled, dealing in particular with the prohibition of entering and staying in unsecured areas.