KGHM IN 2014
|
Our results: Development of the resource base
Sierra Gorda (Chile) Victoria (Kanada)

Ajax (Canada) The Ajax Project is situated in British Columbia, Canada, approximately 400 km north-east of Vancouver, in the close vicinity of the town of Kamloops. The shareholders of the project are KGHM Polska Miedź S.A. (80 percent) and Abacus Mining & Exploration (20 percent), based in Vancouver.

In 2014, a new strategy for the mining plant was published, which foresees that the future infrastructure of the Ajax open-pit

mine will be situated further away from the nearest homes in the town of Kamloops, which will reduce the impact of mining on the local communities and environment.

At the same time, to gain better knowledge of the deposit

as well as to identify possible additional mineralization, drilling was carried out in the area of the planned open-pit mine, and in its vicinity. An analysis was then conducted aimed at possible technological improvements to the mine, which would allow for optimiziation of the investment and its operating costs and, consequently, would lead to a significant increase in the economic attractiveness of the project. 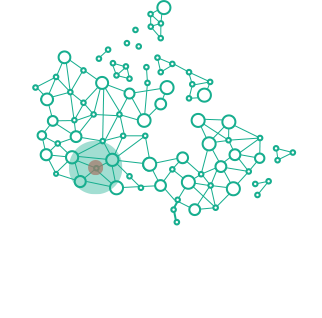 The adopted schedule will result in the construction of the mining plant in the second half of 2016. The Company assumes that production of the first copper concentrate

by the Ajax mine should commence at the end of 2019. The mine will decrease the unit production costs in the KGHM Group.