Over 90% of KGHM’s customers have been in on-going cooperation with the company for many years. Customer satisfaction surveys on the quality of products and service are performed continuously at all stages of cooperation.

KGHM Polska Miedź S.A. operates on a difficult market, susceptible to many external factors affecting earnings. Maintaining long-term relationships with customers has become critical in view of increasing competition in the industry. Customers are a fundamental part of the value creation chain within the company. Signed and implemented contracts ensure stable product sales revenue for the Company in the long term.

The Company’s priority in terms of customer service is to meet their growing requirements and serve customers at the highest level. Excellent service backed by highly competent staff and orientation to customer needs make KGHM a preferred supplier for its business partners. Customer satisfaction is built through good business practices, modern IT, logistics, and financial solutions.

Product sales are based on signed long-term, annual, and short-term contracts. Such a differentiation of concluded trade agreements as well as flexibility ensures, among others:

KGHM’s clients include the largest companies in particular industries, as well as smaller entities operating on both a global and local scale.

Product distribution is carried out directly by the Company, and not only commercial but also logistical teams are involved in sales, as well as external entities cooperating with the Company. Contracts with carriers, shippers, and insurersand preference in customs service related to the status of Authorised Economic Operator (AEO) allow us to serve customers at the highest level.

In 2014 sales of KGHM Polska Miedź S.A. on the domestic market accounted for 1 per cent of overall sales of silver, while export to European Union countries amounted to 99 per cent. The largest foreign recipients of silver were the United Kingdom, Australia, the US, and Belgium. 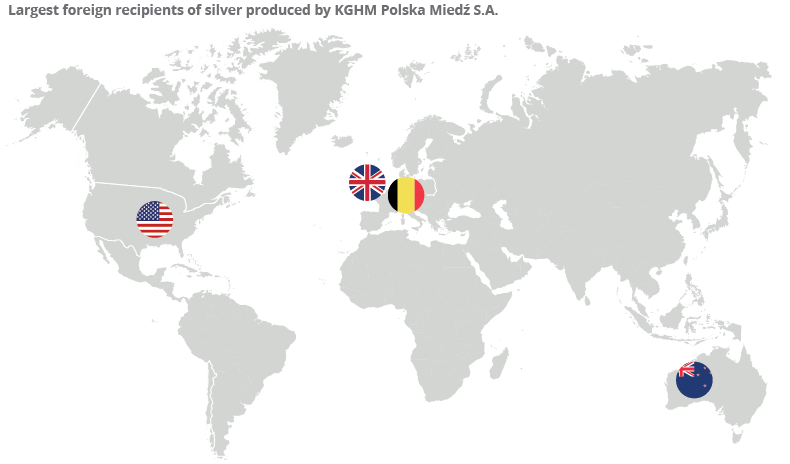 Over 90% of KGHM’s customers have been in on-going cooperation with the company for many years. Customer satisfaction surveys on the quality of products and service are performed continuously at all stages of cooperation. The method used by the sales teams is based on many years of experience, market observation, and on-going direct contact with customers. This allows for an immediate response to customer expectations as well as any reported problems. As part of maintaining good relationships with contractors and the business environment, meetings with domestic and foreign customers are organized annually (including promotional meetings during LME Week in London, as well as industry holidays, i.e. Metallurgist’s Day, Miner’s Day). By taking part in industry meetings, trade shows, conferences, and seminars, the Company builds and strengthens its bonds with its customers. KGHM allows client visits to manufacturing branches as well as eligibility audits of the Company as a reliable supplier within ISO

In 2014, the Company sold less copper than in the previous year. The decline (by 21 thousand tonnes, or 3.6 per cent) resulted mainly from lower volumes of copper remaining available for sale (including lower initial stock of copper in 2014, compared to 2013) and lower sales in 2014 of remaining copper products, especially the lack of sales of its own concentrate.

Total KGHM Polska Miedź revenues from sales of products in 2014 reached PLN 16 492 million and were 10 per cent lower, compared to 2013. The main reason was a decline in sales and a decline in metals prices: copper on the London Metal Exchange (LME) and silver on the London Bullion Market (LBMA).

In comparison to 2013, revenues from sales generated by KGHM Polska Miedź S.A were impacted by:

Revenues from sales in 2014 reflect the positive result of the settlement of hedging instruments in the amount of PLN 531 million (previous year: PLN 450 million).